Algiz – Symbol of the Sage that knows the Highest Meaning and Purpose of our Life – to Save another.

plural noun: revelations
1. a surprising and previously unknown fact, especially one that is made known in a dramatic way.
“revelations about his personal life”; Similar: disclosure, surprising fact, divulgence, declaration, utterance, announcement, report, news, leak, avowal, acknowledgment, admission, confession
2. the divine or supernatural disclosure to humans of something relating to human existence or the world.

Sun/AHAU reflects the Light to See the Truth of our Highest Revelations. By Human Nature I was waiting for God to reveal a Divine Possibility for my life on Earth. That’s not the Highest Truth a Supreme Lord of Creation intends for us to know in the journey we share from the beginning to the end of creation. The Highest Dream of the Whole isn’t love on Earth, but eternal life in a Divine Realm Above. That’s the creation that will manifest the Power for all our Dreams for the Time we spend below.

The Truth is we’ve created our own Hell on Earth. That’s the greatest work at Hand that is beyond all imagination to know the means to the end. We can think we’ve finished with the offering of Forgiveness, but that’s not the whole means and the way to the highest end. We’ve all fallen short in so many ways we don’t want to see. It takes a Revelation from God through small steps of Faith to reach the end of a lifelong affliction of the misery we’ve cast upon one another.

In seeking the Divine Inspiration for the meaning of Time, only one word came to mind: Revelations. That’s all I had to go on. So, first I turned to the dictionary. Then I turned to the chapter of Revelations. It was written by John of Patmos, who most scholars agree is the same as John the Baptist. The Revelations came to him in the Cave of Patmos where he was held prisoner in Greece. I would love to see this place.

You’d think that if anyone was assured their place in Heaven it would be the one that Baptized the Savior. But, that’s not the story written in Revelations. I was a child the lasts time I read it. I couldn’t understand a thing about it. It takes a lifetime of experience to begin to know. And, you have to want to know the Truth and Consequences of the choices that are expected by the Highest Authority of Unconditional Love. It seems all great minds found truth alone in a cave.

To become the Scion requires a choice that’s far beyond forgiveness. It takes willingness beyond human’s power to forgive. It takes an Angel like Zadkiel to bear the sacrifice and surrender to the whole pain of the experience. Jesus refused the wine at his crucifixion that was tainted with gall. I found that gall was the medicine of Myrrh known to ease suffering. We have to feel the whole truth to make the greatest sacrifice of our life.

“As it was in the beginning, so shall it be in the end” was the scripture that came to mind as I read the opening paragraphs. I won’t try to share my understanding because the Words and the Truth is something you have to want to know to Understand for yourself. The whole Truth and Consequences are written there, along with the Truth for our most Divine Future, Above and Below. Revelations was the second place I heard the news today. I found the advice online as the Divine Inspiration from another Human Being – and swore it couldn’t apply to me, as something I couldn’t bear to do. I refused to hear of it. I looked for the scripture that related to the quote above, and the only reference I could find was about Noah, who gathered the whole two by two. That didn’t make sense until I turned to Revelations. If you choose to know you can read it for yourself.

I learned two things first, 1) we can reach for our comfort through the attachment of worldly means. I’ve been curious about the effects of mind altering drugs for the Peace and Understanding of Right Relationship, Above and Below. That isn’t a solution that’s available to the whole, and no worldly means will raise the highest truth born of Communion with the Highest One. We have to be of sound mind to take it in and feel the truth forever as our OWN power for the Highest revelation we can know – to know we CAN know, just as we are created to be. 2) the REAL work is something we can’t see our own way to do. We need a Hand of Divine Understanding Above and a Power Greater than Human Understanding to discern HOW and WHEN we can carry it out as it was intended by the Highest One. 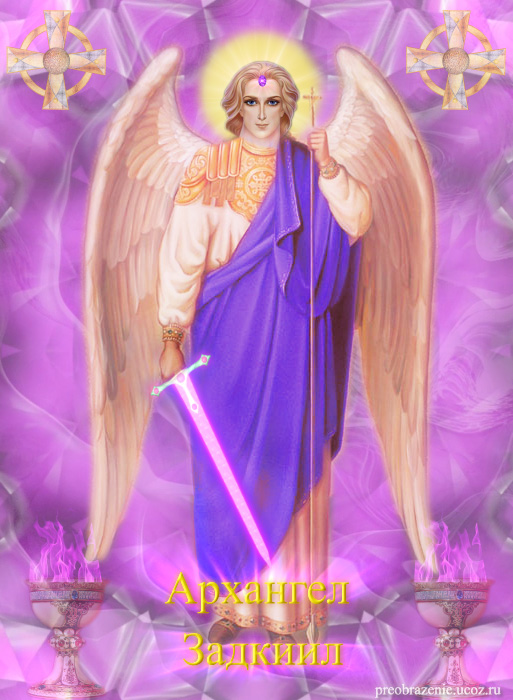 Zadkiel – The Angel of Mercy and the Righteousness of God’s Divine Justice (The Crown Chakra, and the Violet Flame)

I thought of Zadkiel, the Twin Flame of the Masculine and Feminine rolled into one. Zadkiel shares the discernment for Divine Justice, through the reason why we failed, ie. Did we intend to harm another, or was it a matter of “not knowing what we were doing?”  If we didn’t know, Zadkiel fixes what is broken, but we still have to repeat the test that was given. We HAVE TO CARRY IT OUT by our own Sense and Reason and there’s no exception to the Highest Rules to comply with the Creator’s Universal Law of Unconditional Love. We are given many reincarnations on Earth. If the Greatest Law of Creation is, As Above, So Below, that’s one Truth that implies we may live many lifetimes in the “underworld” – our own Hell on Earth – to ever reach our Eternal Blessing.

The whole Truth is a sobering thought and one that requires Divine Discernment. If you want to know you can read it for yourself. The 7 Seals are the steps revealed that will lead to the end. The journey requires our most Vigilant Discernment and application of Divine Consciousness. All things were given for us to experience to know the Truth from one way and another. Though, only by Sound Mind can we claim the Highest Truth came from Above.

The introduction was as far as I read for the First Light of Understanding. I’m asking the One Above to help me see my way through the 7 Seals with the Discernment of Divine Understanding. I do know we can Ask to Know, and we can also Ask for the Power to carry it out to complete the work of Unconditional Love… Love as it was in the beginning to reach the end. The last will be the first and the first will be the last. Therein is written a Promise for our Second Chance to create all our Dreams on Earth, without any suffering at all… if we have the Divine Will to choose the Highest Way.

THE TRECENA OF SUN/AHAU: WALKING IN THE WHOLE LIGHT OF THE TRUTH FROM THE BEGINNING TO THE END.

Galactic Tone 5: Empowerment. At the center of the cube we find Five. Five is an intelligent, organizing force which manages communications and materials, knowledge and application. Fives are natural net workers who gather what is needed. These persons can probe directly to the core of any situation making them excellent investigators.

Seed/KAN: Family, sexual activity and the magic of germination are the characteristics of this sun sign. Natural net workers, Seed people strive to free themselves and others from debt or oppressive patterns of the past. Abundance is gathered by Seeds as if with a cast net. Seed persons are public defenders who work toward uniting community by discovering hidden traps and secret influences of others. To generate true abundance, Seed must learn to appreciate all gifts and lessons received and conduct profound investigations into its self. In the absence of gratefulness and the courage to face oneself, Seed finds itself in less than less fertile environments.

Cherokee, Dragon/UKTE’NA: Dragon’s symbol is Draco winding between the Little Dipper and Big Dipper. Dragon is the Corn Spirit, symbol of dual personality of Corn Mother and Maiden. Fertility and pro-creation from generation to generation. The word dragon means ”eye, to look at, to see clearly”.  Spirit brings energy of Lawgiver, Justice, vigilance and protective, loyal unto death. Ley lines in China are “dragon lines”, energy is sometimes called “orgone energy”, pyramid power or magnetic force. Pyramids and kivas are collector portals for this energy, known as vortexes. Dragon energy beats a path everywhere, stirring things up with a big stick in tune with the beat of the drum, heartbeat of the Earth.